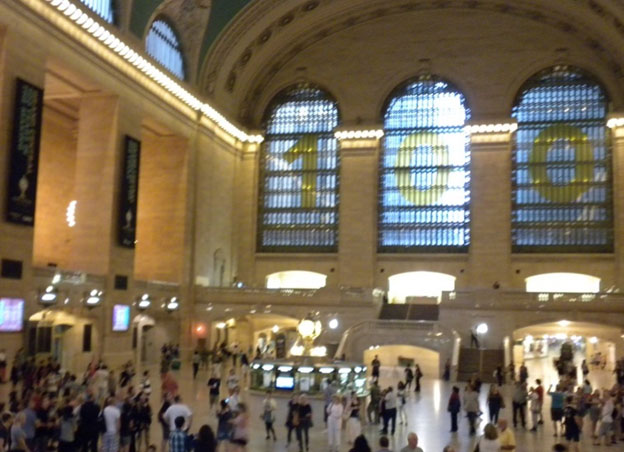 The Introduction’s 4M framework (immediate previous post) helps us understand how a station can evolve and better connect to mobility’s ever-changing modes. Introducing the second ingredient, my photo of Grand Central Terminal during GCT’s 100th anniversary celebration should remind us that a station also succeeds — or fails — based on how its real estate evolves. As the archetypal 20th Century Marvel, GCT also is one of America’s most enduring real estate deals.

Before World War One, GCT’s far-sighted owners created a formula that, amazingly, will serve other American cities in the 21st Century. Their formula did so much more than lay track. They also built GCT’s surroundings into a mini-city, protected real estate values by tunneling under Mid-town to reduce street congestion, and electrified their engines. All by 1920. (And all things we do poorly today.)

What the public knows about GCT is it is a superior civic space, among the world’s great attractions with over 22 million visitors in 2014 (admittedly, a boastful competition.)

But however the visitor numbers get worked, they are mere icing on GCT’s economic cake which has maintained the best property values compared to the world’s stations for all of the 20th Century.  So well constructed was GCT’s deal that the station continues to stay in private hands… despite the mid-century demise of passenger rail which caused the economic failure of almost all stations nationwide.

How can seeming perfection be improved ?  Despite centering some of the most valuable real estate in Midtown, we note that GCT still will not be a Master in the sustainable era until it through-routes tracks connecting New York’s northern suburbs to Penn Station and across the Hudson.  While only slightly more than a mile, such a tunnel is highly improbable; given the tri-state area’s antiquated transportation governance.

Why government prevents the New York region from having this short tunnel is, at first, a mystery. Why do our governments bar regions from all the social and economic benefits of through-routing?

While we should ask ourselves, we also should ask GCT’s owners. Their motives are the same as the ones that built the railroads that terminate there. GCT’s owners want trains to terminate there so passengers work in surrounding buildings. For if trains instead go through to buildings near Penn Station or even struggling Newark, then passengers can work there and those buildings become more valuable than GCT’s mini-city. Knowing the politically powerful, GCT’s owners have incentive to keep trains terminating there… despite all other global cities having through-stations.

Improving America’s bottom-lines, one through-station at a time

While GCT’s surroundings have lasting value, most American central stations are surrounded by freight yards that are being repurposed too slowly. Their owners (usually Amtrak or another public agency) lack incentive and skills to organize partners to repurpose a vestigial rail yard. So, these yards continue to drag down the station’s redevelopment and, thus, discourage train commuting; still the most efficient technology to move people within a region.

While many early 20th Century stations were built as Marvels, most devolved into Mix-ups as autos became dominant and private rails failed. While some stations are transitioning now into a Makeover stage (Denver and LA Union stations are prime examples), this incurs unnecessary cost to the public because we labor under agencies that lack incentive or authority to solve the challenges ahead.

Central stations surrounded by rail-yards are among America’s least exploited redevelopment opportunities. The largest is in my hometown.  Chicago’s Union Station (CUS) has a large railyard (also owned by Amtrak) that should become an obvious extension of the Central Business District. Not discussed is a related opportunity for redeveloping the region. Updating CUS and its rail-yard could start through-routing nine of Chicagoland’s twelve radial lines; all concentrated in that three mile central corridor. But, shaping this 21st Century network requires creating an advocate. This is sketched in the Chicago chapter.

Through-routes are the key Big Picture strategy for trains and, more important, transportation’s role in urban redevelopment. This website accepts the growing evidence that America’s dependence on the automobile now hurts a household’s ability to grow net wealth. Agencies perpetuate this subtraction.

So, this Overview and this website asks those in authority to know this: until transportation governance evolves and rebalances cars and their alternatives, the economic benefits of through-routing will not be available to Americans. Without proper through-stations, household transportation costs will continue to grow faster than inflation and metropolitan redevelopment will be hampered and real estate values (and property taxes) around stations will be suppressed.

If any phase of any official plan does not take strategic steps to through-route any station analyzed by this website, then tax dollars will not be invested as well as they should be. This is primarily so because a through-station has a multiplier effect to increase passengers for all the other modes that converge. Better yet, a central through-station helps improve land values surrounding every station in the through-network. Compare this with 20th century terminals with their relatively weaker multiplier on real estate because terminals at capacity now limit transit growth.

Who is the Daddy?

So the broader policy question before us is this: How do private sector capital and public authority get re-aligned to invest in through-stations that improve all modes so they, in turn, accelerate the redevelopment of surrounds and regional centers ?

To answer this, let’s view America as having a dysfunctional family of modes that, to be productive, must be put together in-sync. This then poses the colloquial question: Who is the Daddy?  Who is in charge?  Who gives taxpayers value? The final chapter of these twelve (see Table of Contents in right column) details those answers.

American metros need a new deal for transportation. The under-funded and under-authorized caretakers of bankrupt assets have been neglected by state DOTs whose primary business is roads. So, who will help every metro explore a new regimen of Public Private Partnerships so that they might serve the emerging greater goods of environmental balance, economic growth and fiscal sustainability ?

Fortunately, this triple bottom-line can be partially achieved if encouraged by new federal guidelines. Yet, each metro also requires its particular deal to develop their specific through-routing multiplier. This two-level, national-metro authority re-alignment has occurred generally in most of Europe’s global cities and helps explain why they entered the era for more sustainable transportation so far ahead of America’s global cities.

Why So Many Summaries ?

Repetition and reiteration. The goal of “What Stations Teach”  is to fashion national guidelines that support many large metros. The reasons are clear: each region cannot reinvent the wheel; nor is Uncle Sam helpful if regions are forced outside their political comfort zone.  So, reiteration is this website’s job: analyze, synthesize solutions, critique them and do it again…. until we get it right. Here are the initial summaries “WST” uses as steps in this iterative process.

First step, take the Quiz of six stations and read each’s synopsis. (This also is how you subscribe to “WST” and start giving feedback.)

Second, The 4Ms Introduction sets a framework for evolving stations so they better center commuter rail. The Overview you just read suggests a context in which successful updates maximize land values only if they master regional politics.

Third step and released October 12, there will be working summaries of the forthcoming twelve chapters. Most chapters have a pretty good draft; thus allowing us to weave together trends and share solutions nationwide.

Fourth, chapters then are released monthly. For each, your job is to pick apart the details. (The two stations with really big problems probably will be released every two months toward the end of this phase of the research project.)

And if all that is not enough to get commuter rail on track in the U.S., then we start drawing detailed lessons from the global cities of Europe sometime in 2019.

To prepare for the October 12 posting of working summaries for each chapter, let’s briefly preview the Table of Contents on the right.

Starting with the positives, we view Philly as a legacy exemplar and America’s only through-route. Two more chapters analyze how governance innovations add to transit growth in mid-sized metros of the Twin Cities and Denver.

Then, we get a glimpse into the future by proposing how further devolving of state authority can help the San Francisco Bay Area and LA County work through their obstacles to improving train service. California’s success should give ideas to other multi-metro states such as Florida, Texas and, hopefully, Ohio.

Then, three chapters address the systemic problems that require a federal policy to govern properly shared-state train corridors within metros. “WST” offers innovative proposals to govern train service for the DC region, Baltimore and the tri-state New York metro. All require their regions to reorganize authority with the aid and leverage of Uncle Sam.

Two remaining chapters cover the extremes of metro relations with the state. Being the state capital, Boston has a healthy relationship with a wealthy state and should have a relatively easy time through-routing its two terminals into a network. (Thus speaks the optimist in me.)  At the other extreme, Chicago’s solutions are held captive by an insolvent and dysfunctional state that, frankly, will require radical reforms if regional train service is to progress. (Thus speaks the citizen of Chicago.)

Synthesizing all the above chapter highlights, the October 12th post lastly sketches Uncle Sam’s role in re-aligning private capital, state authority and public investment to facilitate each metro’s deal so each sticks longterm and, thereby, helps each metro prosper.

It will not be easy to adapt federalism to transportation’s new era. But, American cities have no choice. Other global centers have advanced train technology and converted terminals to through-networks. We have lost what America mastered in the first half of the 20th Century when it became great.

Fortunately, we are closer than we might think to catching our global competitors. But, that starts with learning from our mistakes and preventing them.

At the end of the “Table of Contents” below, note that “What Stations Teach” will post its three remaining summary articles after the “FAST Act” is Reauthorized.

Meanwhile, please read Robert Munson’s more recent articles in “The Pre-Reauthorization Series“. This should be completed in 2019 and is posted on “The Reauthorization Dialogues.”

As always, you can email him at rcmunson@icloud.com.

A Brief History of Why Major U.S. Metros Cannot Through-Route

Preview C: Stations That Improve Had Some Improvements In Regional Politics (posted 12/12/17)

Preview E (part 1): How Uncle Sam Can Help Tunnel Like Never Before (DC and Baltimore)

Part 2, Boston & Beyond Trump (posted 3/30/18, plus ideas for proposing a federal policy for regional rail)

The Concluding Transition to this project’s next phase

Part 1) What Did We Learn?  Terminals Studied; Similarities And Peculiarities For Regional Rail (posted 2/25/ 2019)

Part 2) Who Is Similar And Changing ? If Toronto, Sydney And Melbourne Can Use Trains To Improve Commuting, Why Can’t The U.S. ?  (posting delayed until after Congress Reauthorizes commuter trains)

Part 3) Lessons From The UK’s Corridors: A Survey Of How The Thameslink, Crossrail And 3 Other Corridors Are Evolving Metropolitan Authority

After posting these 4 concluding Parts, this blog will evolve and help serve as a forum to detail further a federal policy to promote regional rail.

Blogs Relied Upon By “What Stations Teach”